Here we are again, back to catalog the innumerable and invaluable career exploits of Cheick Guillaume Ouedraogo aka The Darkness aka Cheick Kongo aka The Foul Gawd ™. In this installment, we return to the hallowed ground of Rings: Holland, to watch a young Kongo ply his trade and against the spectacularly named Dave van der Veen, and work his way to the spot of reverence, perhaps even deification that he holds today.

The fight starts with Kongo throwing a inside leg kick and Dave van der Veen (DVDV) attempts to close the distance, but Kongo shrugs him off. The inside leg kick is high, but isn’t in danger of really being a foul. Already, I am disappointing.

The two exchange strikes for a brief moment, until Kongo grabs double-underhooks. Kongo throws so dubiously legal knees, although it is important to note that DVDV doesn’t complain, instead responding with a series of right hooks to the body, until Kongo’s barrage of knees overwhelms.

Kongo continues to get the better of this exchange, mixing knees and rights to the body, with cunning precision. However, Kongo, ever the gentleman, decides against perpetrating a further beating on DVDV and goes for a guillotine choke.

Now here is where we must start asking questions. How could DVDV simply slip out of the vice like grip of Cheick Kongo? Grease? Vaseline? Some sort of industrial Teflon coating? We can only speculate, until that coward Dave van der Veen comes forward and admits to the lengths he was willing to go to defeat The Foul Gawd ™.

From here van der Veen works the ever-effective submission hold of holding your forearm on an opponent’s throat, eventually moving into side control. The action stalls out from there and the referee stand both fighter up.

Kongo again grabs a clinch and proceeds to throw knees into the stomach of his opponent. Perhaps out of sheer incredulity or maybe an need to set the universe on it’s intended course, Kongo again attempts the guillotine choke, this time all of the industrial lubricants in the world cannot save  known cheater Dave van der Veen.

While Kongo may have been able to grab the choke this time, the waxy build-up that is surely cached all over DVDV’s body allows him to break free again. van der Veen stalls the fight from top position, again eliciting a stand up from the referee.

After the standup, Kongo grabs DVDV in a head-and-arm clinch, throwing a few knees to the body of his opponent, while van der Veen counters with some ineffective knees to Kongo’s legs. From this position, by some supernatural force, van der Veen is able to wrestle Kongo down to the ground.

DVDV doesn’t do much of anything from this position, he just paws at Kongo. I assume he depleted all of his energy taking down Kongo, which if I can be real for a minute is impressive because for all of his faults Kongo is a pretty good defensive wrestle, even here. ANYWAY, this cheating loser van der Veen manages to get swept by the excellence incarnate Cheick Kongo.

Things stall out on the ground again. Back standing van der Veen presses Kongo against the ropes, but Cheick is able to spin out and land a pretty substantial flurry, before DVDV drags him down yet again.

But, this fool van der Veen, this cheating coward is still unable to mount any meaningful offense. He just lays there, just a greasy cheating blanket. The referee, who at this point has be exhausted from all the standups he’s had to force, again calls for the fighters to, you guessed it, stand up. From this point point until the end of the round, Kongo proceeds to piece up DVDV, in particular a stiff right uppercut rocks DVDV. 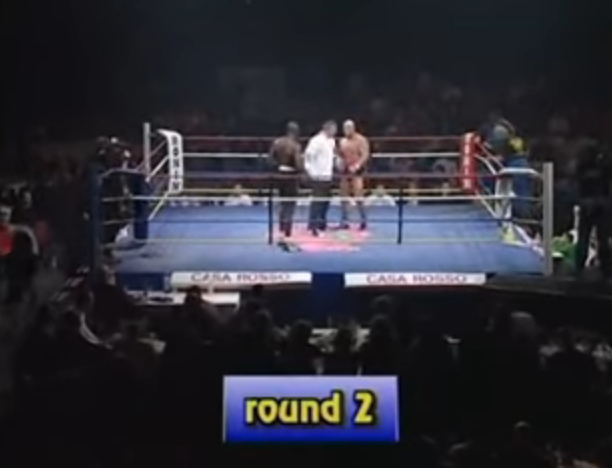 Dave van der Veen should be applauded for his persistence. Despite not having any sort of success on the ground, he again tries to take Kongo down, this time Kongo sprawls out to avoid the takedown and returns the fight to the fight without the aid of a referee standup. Kongo tees off on DVDV eventually leading to a referee stoppage.

However, Rings: Holland has a standing 8-count rule, so the fight continues. Unfortunately for DVDV, its more of the same, Kongo is still teeing off, even van der Veen’s futile attempt to grab double underhooks can only briefly delay the assault. Kongo throws some heavy knees and then follows up with a succession of rights and lefts, and again the ref steps in, even if his first attempt was less than enthusiastic.

I’ll give Dave van der Veen credit, even if if he is unrepentant and unabashed cheat, he can take a hell of a beating. However, Kongo is just too much for him, seconds after the fight restarts Kongo is all over him and the fight is finally called off.

And so ends the second foray into the world of No Holds Barred fighting for one Cheick Guillaume Ouedraogo. For the purposes of this project, it is a bit of a disappointment as The Foul Gawd ™ was not penalized for a single foul, but he did absolutely batter van der Veen.

This site uses Akismet to reduce spam. Learn how your comment data is processed.